Today’s Stanton Milling products are the legacy of an enterprise that began when the mill was first built in the 1850s along Sewickley Creek in the area that today is known as New Stanton, PA.

In the 1920s, the mill produced the very first self-rising mix of buckwheat flour. A century later, the recipe hasn’t changed. It’s known as “Stanton’s Own Old Fashioned Self-Rising Buckwheat Pancake Mix” and it remains our most popular product today.

Interested in learning more? Read a more-detailed history of the mill below. 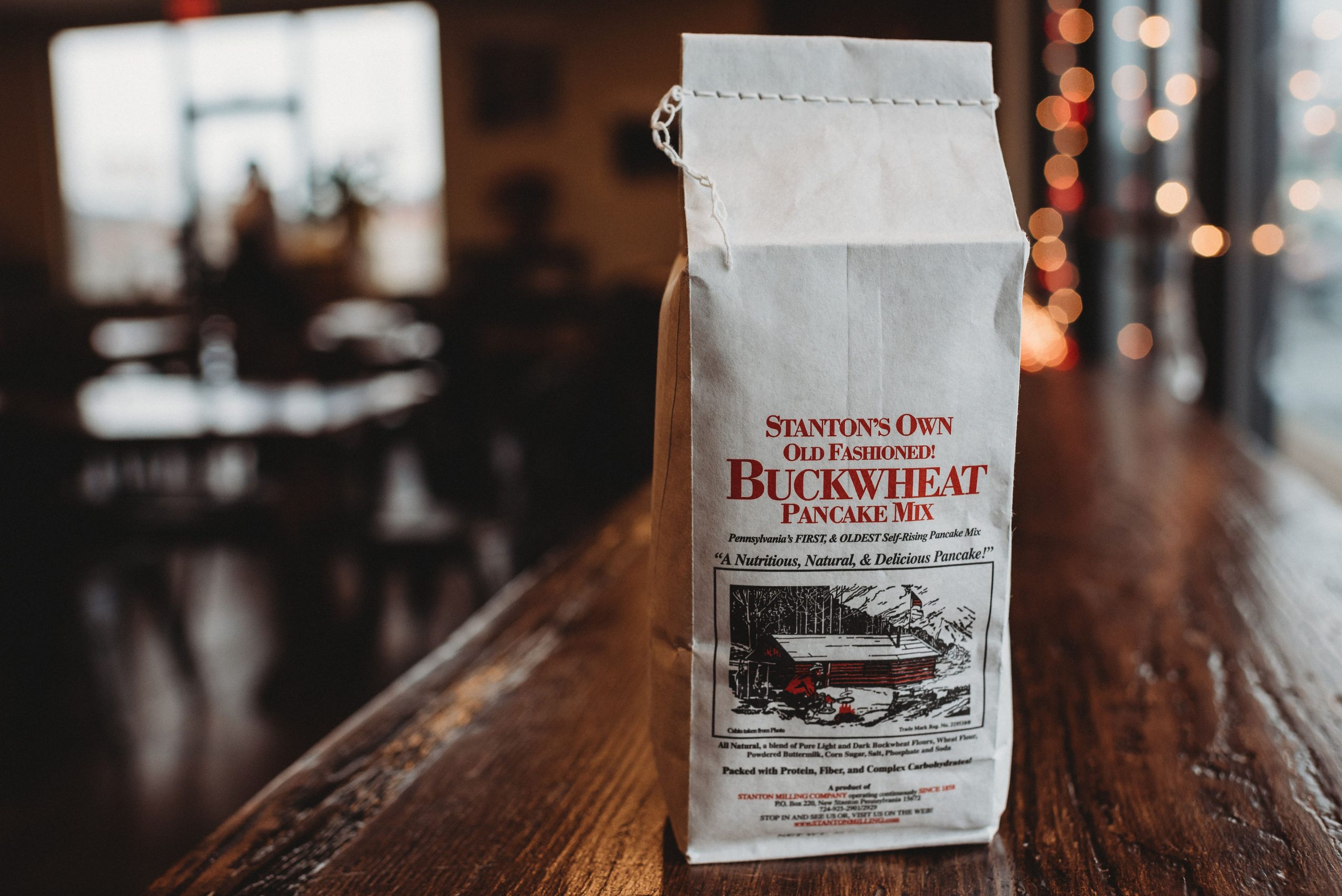 Where to Find Our Products

Stanton Milling regularly distributes to small stores in PA, VA, and WV. Now through online sales, we have customers from coast to coast. One out of every two customers orders our self-rising buckwheat pancake mix, to which you only add water. Taste it for yourself!

Find your favorite products on our website, and order online via Amazon. Every order is packed and shipped from the Stanton Daily Grind.

Wholesale customers and distributors can contact our corporate office at Hepler’s Town & Country Enterprises at 724-925-2929 or contactus@stantonmilling.com. 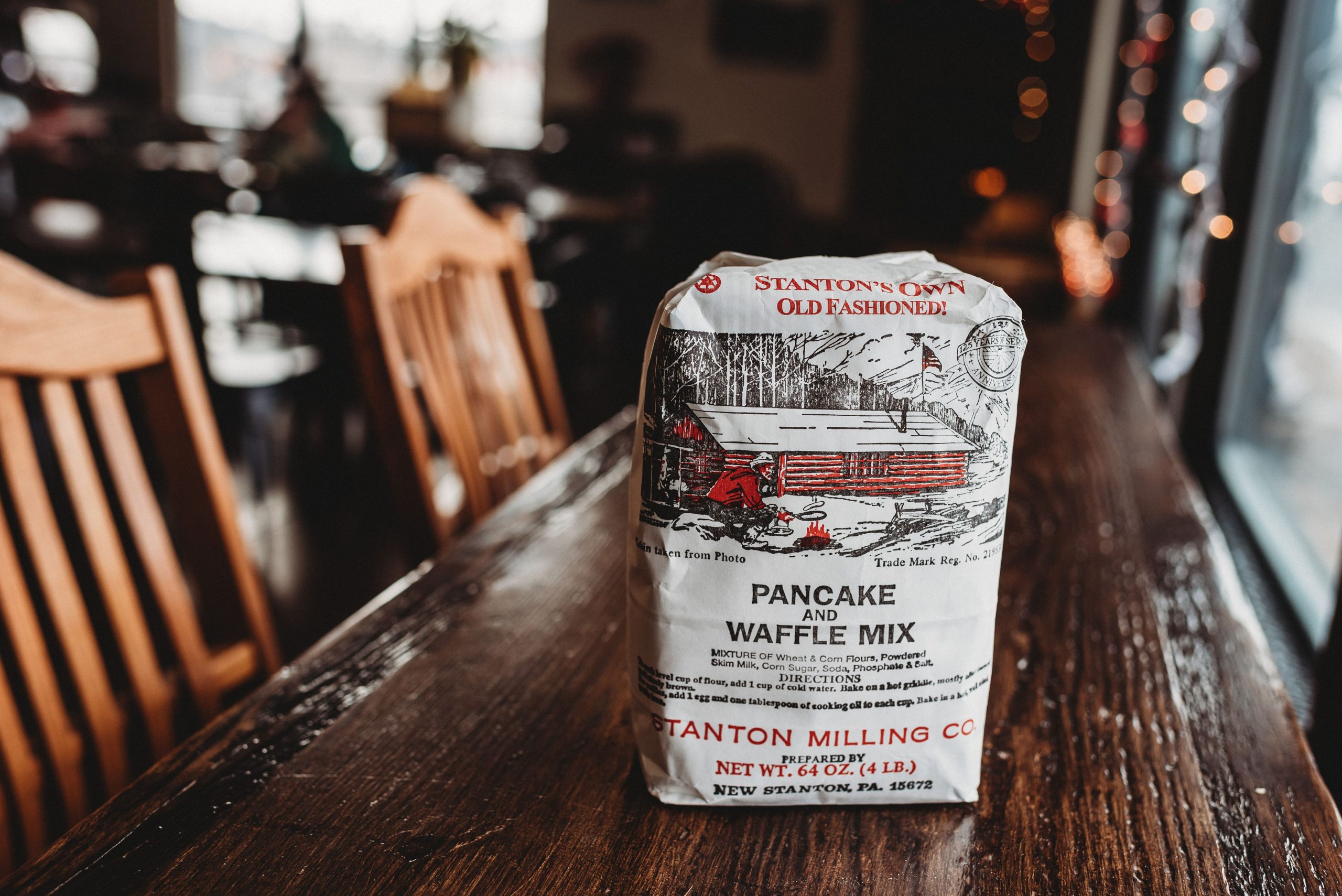 THE HISTORY OF STANTON MILLING

Stanton Milling originated in the town known today as New Stanton, PA – though it was known by several other names throughout its past. The mill name also changed through the years as its ownership changed hands. Here is a brief overview of the mill’s history.

In the 1850s, a 5-bay, 4 1/2 story brick mill with stone lintels was erected on Sewickley Creek, constructed by architect William Pollack, as contracted by Colonel Israel Painter — a veteran, prominent land owner and business entrepreneur. The date stone from the mill was carved with the name and date “Painter 1853”.

In an 1857 Atlas, the village of New Stanton was labeled in an area just north of the actual mill site (along present-day Route 119 / I-70 exit). The map shows the original mill was closer to an area referred to as Sewickley Mill, a logical name given that the mill was located on the Sewickley Creek.

The mill site was surrounded by property owned by “Col.I.P.”, the assumed abbreviation for Colonel Israel Painter. By 1876, another Atlas map labeled the area near the mill as Paintersville, likely named after the multi-property owner and milling family. Deeds show that the mill remained in the Painter family until the early 1880s.

Around the year 1882, the mill was acquired by the Stanton family. Not only a miller by family heritage and trade, Mr. Stanton seemed quite the entrepreneur and politician. He lobbied for a local post office, which he housed in the flour and feed mill. At that time, mills were the center of village activity, with subsistence farmers and larger farm operators bringing their grains to be ground at the mill for either food for their families, or grains for their livestock. Having a small general store or post office in the mill was a natural fit, and common at those times. During the 1890s, this particular post office was apparently one of the first two Rural Free Delivery Systems in the United States.

By the early 20th century, Paintersville was now being referred to as New Stanton, again – likely due to the prominent milling family. In 1926, Thomas Stanton (John’s son) formulated the very first self-rising mix of Buckwheat Flour. He called it “Uncle Tom’s Old Fashioned Self-Rising Buckwheat Pancake Mix”. The picture on the bag is supposed to represent the old hunting camp where Tom entertained his hunting buddies from New Stanton…and it is still exactly the same print as the one that appeared on Stanton’s 1926 flour bag.

In the Winter of 1949, Mr. Stanton passed away. At that time, the family of Albert Karl Hepler (who descended from a long line of millers) had moved to the area from New Alexandria after their mill and property along the Loyalhanna Creek was acquired by the United States Government. [Under the direction of the U.S. Army Corps of Engineers, that area was being taken for the Flood Control Program.] The Hepler family briefly owned a mill in Waterford, PA before purchasing a feed store in Youngwood, and the Stanton mill along Sewickley Creek in New Stanton.

The Stanton family offered the buckwheat business to the Hepler family, who accepted and promptly completed the purchase of the patents, copyright formulas, and equipment to continue production of this unique product. Into the late 1970s, the same mixer, packer, and scales from 1926 were in use producing “Uncle Tom’s Old Fashioned Self-Rising Buckwheat Pancake Mix”.

By the early 1980s, the mill was approximately 120 years old. At the same time, local farming and agriculture were on a continual decline, decreasing the need for a local mill. Given the deteriorating state of the mill building and the decreasing revenue from mill operations, the Hepler family decided to sell the building to see it repurposed and preserved. The property was sold in 1985 to a firm, which soon after filed for bankruptcy in 1989. The mill building and property changed hands two more times before ultimately it was demolished. Until its demise, it was the oldest known standing structure in the Borough of New Stanton, and in 1993 had been found eligible for listing on the National Register.

However, there is a happier ending to this history. When the building was sold, the Hepler family retained the recipes and milling business holdings, ultimately deciding to outsource the grain processing to another mill that could continue to produce the fine quality products for which Stanton Milling had been known.

Though the recipe is still the same, the most popular product was renamed slightly to reflect the family that first formulated it. Uncle Tom’s mix today is called “Stanton’s Own Old Fashioned Self-Rising Buckwheat Pancake Mix”. And the Hepler family and the Stanton Milling Company are pleased to continue the New Stanton tradition.

Today, Stanton Milling Company sells its products at Hepler’s Hardware in New Stanton, and regularly distributes to small stores throughout Pennsylvania, Virginia, and West Virginia. And now through online sales, we have customers from Massachusetts to Florida, Texas to Arizona, Tennessee to Ohio, and back. One out of every two customers orders our “Stanton’s Own Old Fashioned Self-Rising Buckwheat Pancake Mix”, to which you only add water. Taste it for yourself!